I started making websites back in the year 2000 when I was 12 years old. At first they were pretty bad, but with time I learned a little more about graphic design and coding and made it work. I was friends with a lot of people who owned anime-themed domains collectives who made various shrines, fanlistings, and cliques. A lot of those sites are gone, sadly, and I never had a domain name, because I couldn't afford to get one and the appropriate hosting. I stopped running my sites in 2008 mostly due to boredem. A lot of my friends had stopped running theirs too; the craze had passed. But in those eight years, I ran the following sites: fanlistings for the artist Junko Mizuno and Hazuki Fujiwara from Ojamajo Doremi; shrines for characters like Meroko from Full Moon o Sagashite, Riku from Kingdom Hearts, and Raven from Teen Titans; a pixel site you can read more about below; and even a web comic based on Alice in Wonderland.

Below are some examples I found on the Wayback Machine of my previous sites. Right click and open image to see them in their original scale. 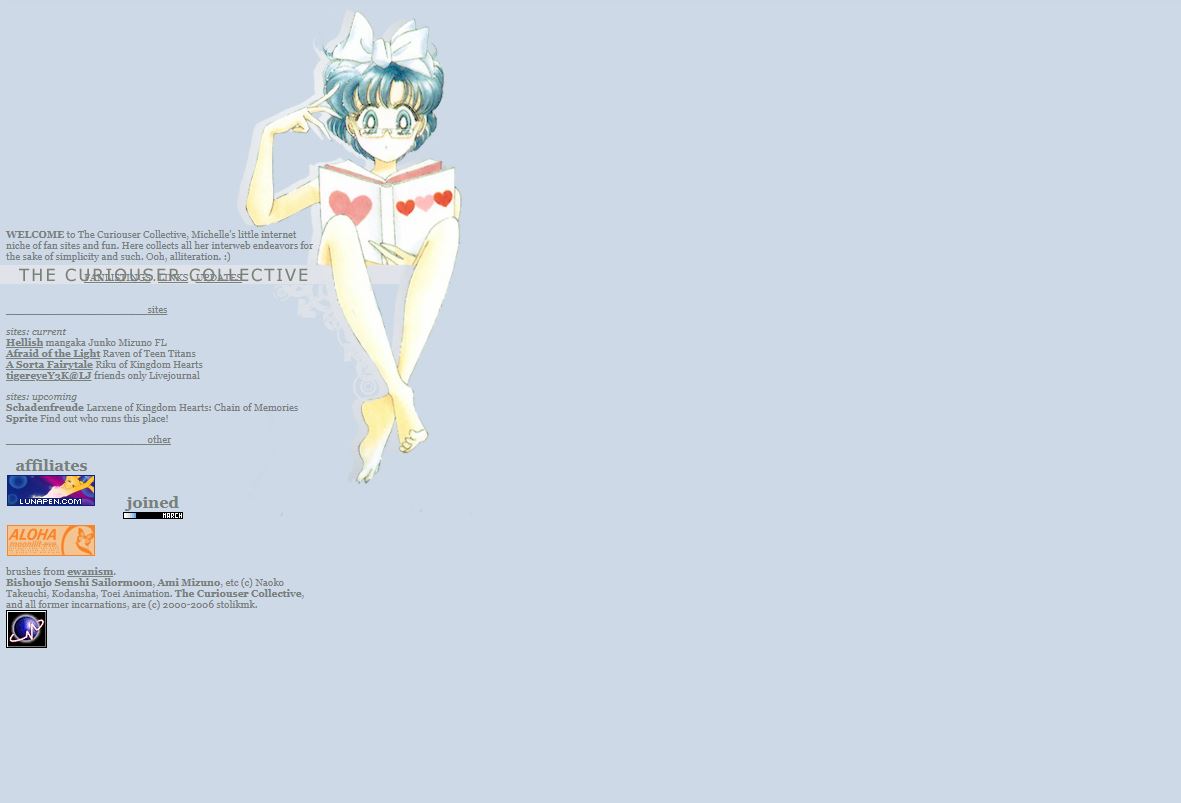 The previous image is a screencapture from the Wayback Machine that shows a 2006-2007 layout from my old website, which was called "The Curiouser Collective" at the time. If it looks familiar, it's because I used this as the inspiration for this site's first version. I've always been a fan of Sailor Mercury, and this manga illustration was one of the few Ami got to herself, so I decided to recycle the idea and see what else I could do with it. 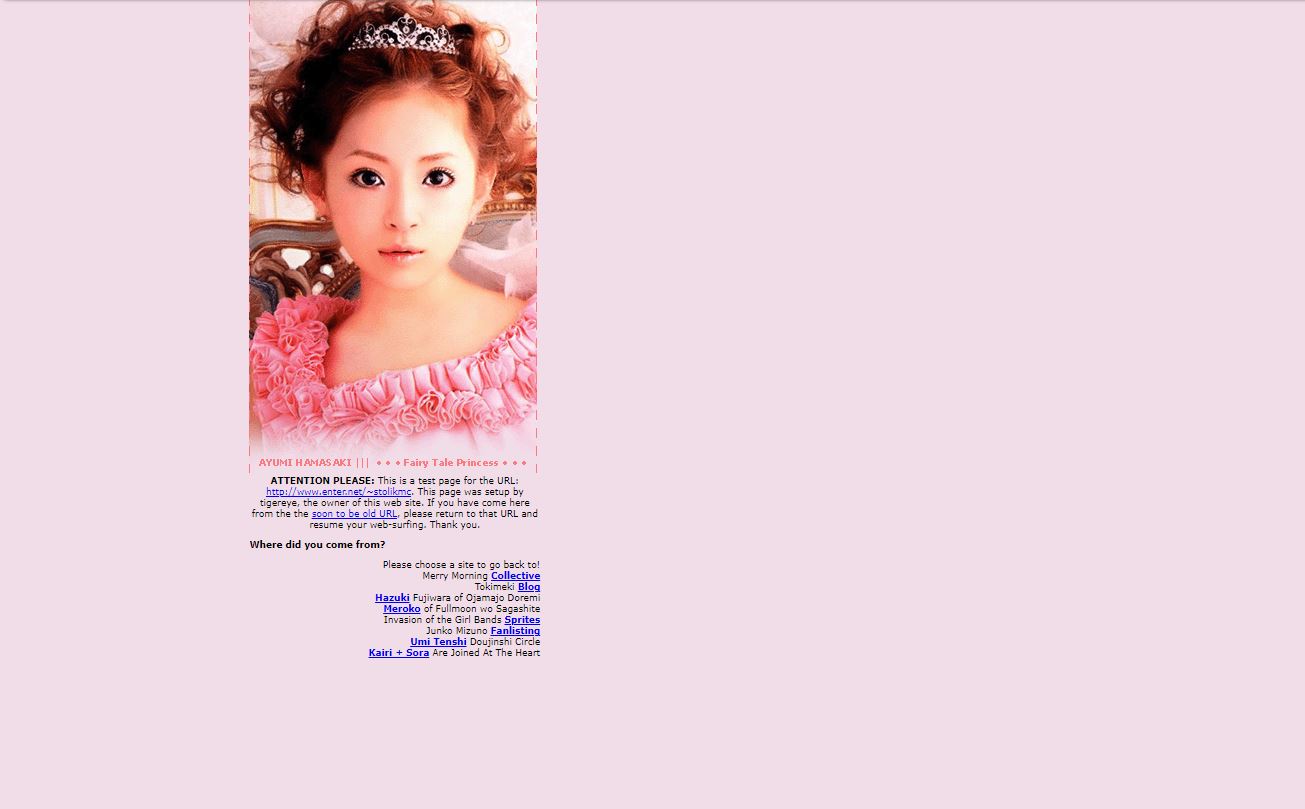 This was a landing page I used from 2003-2006. My site was always hosted on the free space from my family's internet service provider. Back then, it was common for providers to give out small subdomains to host sites on. My dad had been using the original subdomain URL, but once I noticed he wasn't anymore, I asked if I could use it instead. He said yes, and so I made this landing page. I'd always intended to just move my sites there, but it took me a while to get around to it. (I was always very slow when it came to working on sites back then, and tbh I don't think it's changed much.) So this page sat in it's space for a number of years until I actually got around to moving. The woman in the layout is J-pop idol Ayumi Hamasaki.

Before I renamed it, my collective was called Merry Morning. In this 2006 layout, I used a cover from a Jubilee miniseries because I was really into American comics at the time. I divided the art into sections to make it look like comic book panels. Other than that, there isn't a lot to say about this one.

Another Merry Morning layout from 2005-2006. This one features Mamimi from Fooly Cooly. I think it was airing on Adult Swim in the US and I was able to see it for the first time. The quotes on the image are a little soppy, and I think I just made them up because I was trying to look cool. From the links, you can also tell I had a personal site at the time. I don't remember a single thing about it lmao. 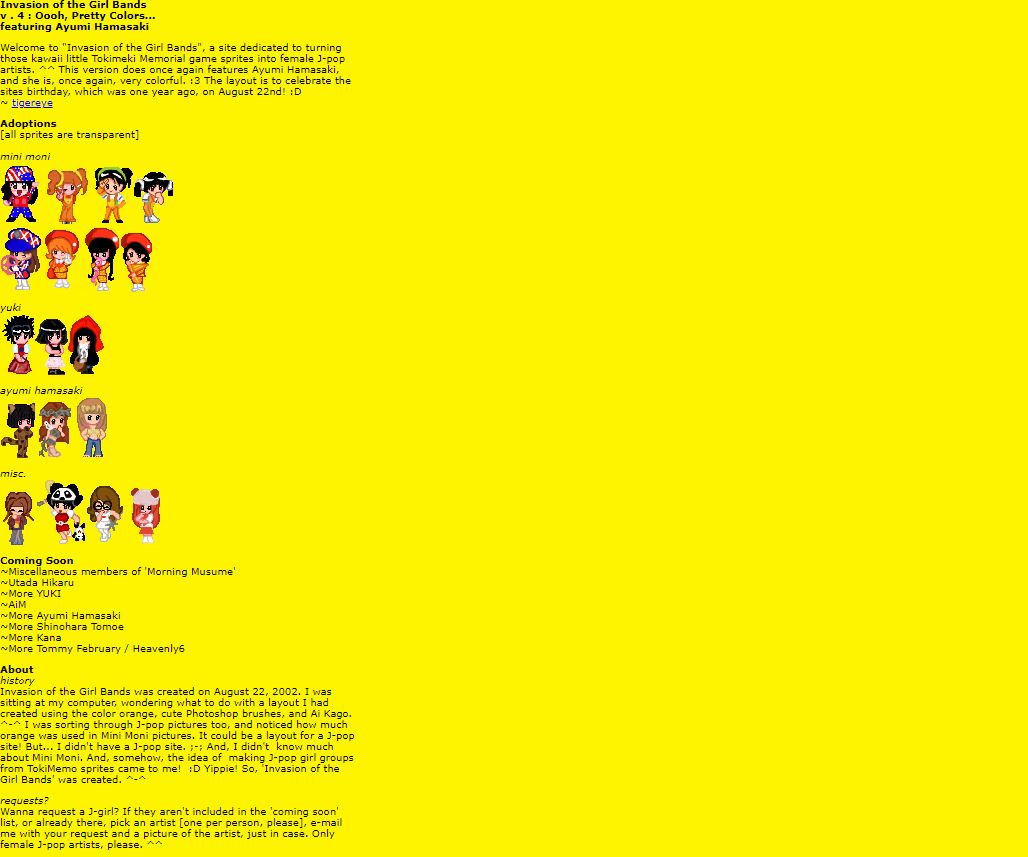 This site was called "Invasion of the Girl Bands" and it's where I posted pixel art of J-pop idols. I started it in 2002, and though this says it was version 4, I don't remember the site being around very long. The pixels were based on Tokimeki Memorial and Sailor Moon game sprites and to be honest, I did not do a very good job on them. But I tried!